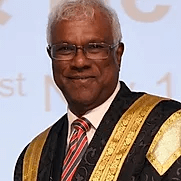 Known as the living legend in the sports world, he is a well-known sports personality for his accomplishments in the field of sports as well as in the medical field for his contributions to the health industry.

He has a colorful and internationally accomplished life and role model for many to gain from his success and life balance formula. In the field of sports, his accomplishments include: ‘Fastest Man in Asia’, ‘Flying Doctor’, first Malaysian Sportsman of the Year (1966), 1st Malaysian in the Olympic Semi-Final (Tokyo & Mexico) and ‘Holder of the Unbroken Record in the 200m Track’.

In the field of medicine, he is the holder of the National Science Award, a former Deputy Director-General in the Ministry of Heath, Founding Fellow in the Academy of Science and Head of the Bacteriology, Head of Laboratory Services;

Academically, he is was the Pro-Chancellor of University Sains Malaysia (USM) 2011